I was not the market nerd then that I am now. But I was very interested, coming at it from a global macro standpoint, given that running a small company (from which I moved on in 2012) demanded I be aware and ready to make adjustments to a changing (and progressing) world. As an American manufacturer trying to survive in an increasingly globalized (complete with ultra cheap labor) marketplace, it truly was “automate or die”. We automated. 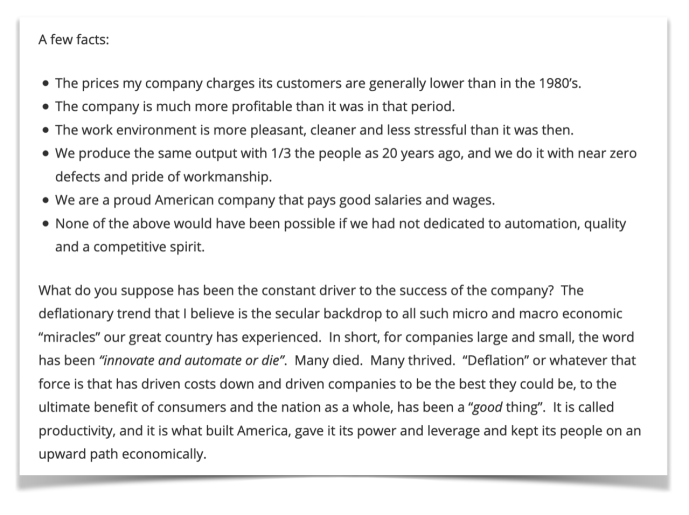 Now think about Wright’s Law, as explained by Steve Saville.

Wright’s Law, EVs, and the stupidity of inflation targeting

Moore’s Law worked well in the semiconductor/computer industry for a few decades, but that was due to a set of circumstances that existed in that particular industry over a certain time rather than the general applicability of the ‘law’. The ‘law’ no longer works in the computer industry and can’t be applied in a useful way to technology in general. Wright’s Law, on the other hand, is more useful when it comes to explaining and predicting the effects of technology-driven improvements in efficiency.

It’s hard to overstate the stupidity of a central bank strategy that is designed to make the economy less efficient. Currently we have the absurd situation in which the faster the rate of technological progress, the more that central banks do to create “inflation” and thus offset the benefits of this progress. They aren’t doing this because they are malicious, they are doing it because they are trapped within an ideological framework that prevents them from understanding the way the world works.

Back on October 5th we noted that Moore’s Law was under threat as a side note in the post linked below. My personal – non-expert – view is that the pressure of ongoing central bank inflationary policy is slowly eating away at technology’s advancements.

AI Chips: What They Are and Why They Matter 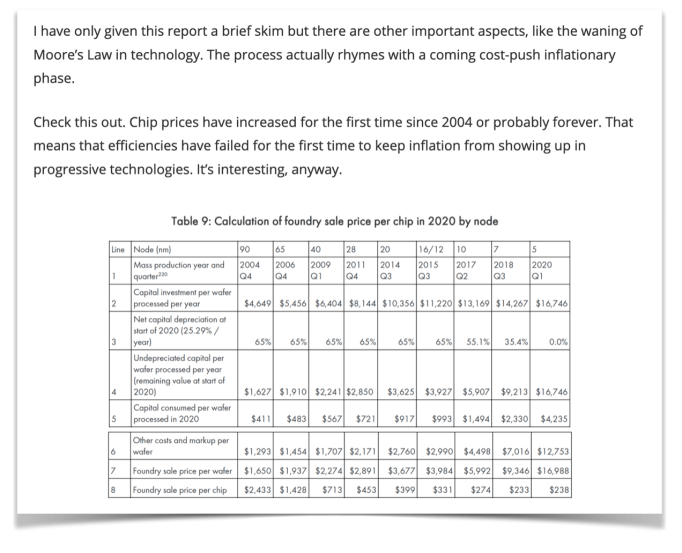 Using the Electric Vehicle industry as the example, Steve points out that Moore’s Law can be applied to any industry whereas Moore’s Law is Technology-specific. Regardless, central banking works against this wellspring of progress too.

The reason that Wright’s Law works better than Moore’s Law (Wright’s Law can be applied to all industries and has even been more accurate than Moore’s Law in the computer industry) is that it focuses on cost as a function of units produced rather than time. The beauty of Wright’s Law is that once an industry has been around for long enough to determine the relationship between the increase in units produced and the reduction in unit cost, accurate predictions can be made regarding what’s likely to happen over years and even decades into the future. The limitation is that a certain amount of history is required to establish the percentage reduction in cost that accompanies a certain increase in the production rate.

Which ever law or economic formula you want to apply to the progress of human innovation over time, there is a force constantly working against these advances. That force is central bankers and their crazy system of printing (funny) munny on demand to feed an inflation-driven economy in constant effort to raise prices, especially stock prices but sadly, so too consumer prices.

In my highly technical view, this price spiral over time causes the real economy to fly up its own ass until it liquidates the inflationary excesses (ref. Q4 2008 as but one glaring example). Then, our heroes over at the Central Planning Commission re-inflate and start the process all over again.

The net effect over time is rising prices (rich asset owners get richer, everyone else gets poorer on a purchasing power basis) and extremely elevated moral hazard more often than not, with the rare low moral hazard points being the time to buy the terrifying depths of the liquidation du jour.

Here in 2020, with the very soul of America torn at the line between the rich (getting richer) and the middle/poor (getting poorer) and with the Fed in balls out inflation mode, it’s a macro Groundhog Day where the same damn thing happens cycle after cycle.

The wellspring of productivity has been drained by ever larger government and spending. Not only has productive value been drained, but the spending has continued right off the balance sheet and into mind boggling debt. Thus, a deflationary spiral could only be painful now. The same entities that have told us they will defend us against it are the ones who made it malignant to begin with. I can’t help thinking of the Jungian “shadow”; the longer it is denied, the more fierce it will ultimately be in exacting revenge for that denial.

Meanwhile, the ridiculous political debate of Trump vs. Biden rages on. Hint, where inflation is concerned it does not matter who wins. The Fed is not political. The Fed is a destructive entity wasting the potential of human progress and ingenuity over the cycles and the decades.

Gary Tanashian of nftrh.com successfully owned and operated a progressive medical component manufacturing company for 21 years, keeping the company’s fundamentals in alignment with global economic realities through various economic cycles. The natural progression from this experience is an understanding of and appreciation for global macro-economics as it relates to individual markets and sectors.

Biiwii.com (RIP 2019 as there were just not enough hours in the day for two websites) was created in 2004 as a way to help communicate a message about deeply rooted problems with too much debt and leverage within the inflated financial system. Our concerns were confirmed and our message justified in 2007 as the system began to purge these distortions, resulting in a climactic washout extending from October, 2008 to March, 2009.

But the URL ‘biiwii.com’ came from the old saying ‘but it is what it is’ and this sentiment addressed the need to remain impartial about the markets, despite personal beliefs. Over the long-term, the world changes and any successful market participant should be ready to accept changes or revisions to a given plan.

Geek-like interests in technical analysis and human psychology, and various unique macro market ratio indicators were added to the mix, with the result being a financial market report, Notes From the Rabbit Hole (NFTRH), combining these attributes to provide a service that is engaged and successful in all market environments.

Since 2004 our work has been featured at financial websites including GoldSeek and SilverSeek.com

0
Gold and Crypto: Is This How Charts Look Before A Monetary Collapse?American Militarism Marches On: No Discussion or Media Coverage of Washington’s War Against the World

Gold Bulls Back in Charge as Delta Variant Spreads

Gold Bulls Back in Charge as Delta Variant Spreads

News
6 months ago
0
Reflections Over 2020: Battlefield Weapons, Coronavirus, And Gold

News
9 months ago
0
Huge Gold Open Interest, The Boys Will Be Going After Gold!

Huge Gold Open Interest, The Boys Will Be Going After Gold!