2021 is setting up to be a great year for gold (and mining stocks) but especially for silver. As we head into year-end, the gold stocks have been grinding higher while the silver stocks have been trending up. Generally speaking, the miners lead the metals, and together with the technical setup, silver is set to move quite a bit higher. Gold stocks will, too, but I fully expect the gold-to-silver ratio (GSR) to contract in 2021 and, in turn, silver stocks to outperform gold stocks.

While news flow has started to slow as many go on the holidays, the last several weeks have seen a resurgence in M&A activity, highlighted this week by a smart strategic friendly acquisition of Premier Gold by Equinox Gold. Assuming a $1,800/oz. gold price, this acquisition excluding the 30% interest in I-80 gold increase’s Equinox’s NAV by over $500m. At Goldseeker.com, we are in the process of finishing two company reports, analysis, and valuation, which will be sent to our free email-list before the new year, including $EQX. 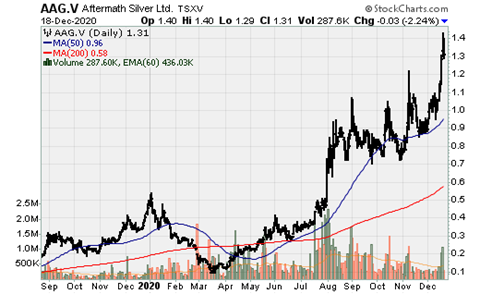 Aya Gold & Silver: The junior silver producer announced the best drill result on record of 4m @ 9,436 g/t Ag. The company’s flagship asset in the Zgounder mine in Morocco is currently being optimized to double annual silver production to 1m oz. Ag p.a.; however, there is significant expansion potential, with a medium-term goal of achieving 4.0m oz. Ag p.a. There is also significant resource expansion potential. Once 8m oz. Ag has been produced; the company can also increase its interest from 85% to 100%. A Feasibility study is currently being undertaken for the expansion of Zgounder to 4m oz. p.a. and a PEA is being undertaken at its Azegour.

This is one silver producer that goes overlooked given the upside potential not just at Zgounder but through other assets in its portfolio, notably Boumadine. Per the PEA, Boumadine would produce 83k AuEq oz. for 2-yrs, increasing to 105k AuEq oz. for 11-yrs. This a definitely a company worth keeping an eye on. 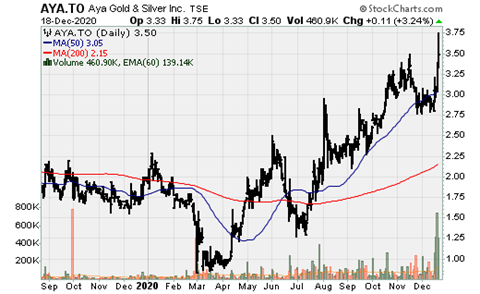 Bluestone Resources: With construction to commence in 1H 2021, it continues to report high-grade drill results, which will inevitably lead to a significant expansion of both production (beyond Yr-3 and over the life of mine). The following results are from the South Zone of the Cerro Blanco gold project: 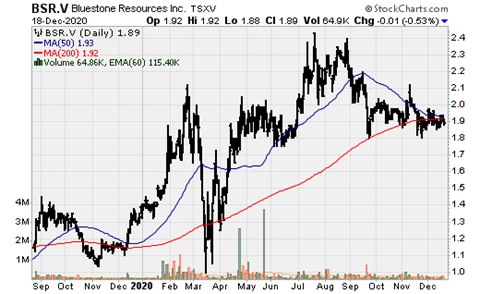 Equinox Gold: Announced a smart, strategic acquisition of Premier Gold Mines. For a more detailed analysis, click here. Not included in the summary was the cost of the acquisition and the value of the assets. We are currently updating our company report, valuation, and price target for those on the free email list at Goldseeker.com.   The acquisition price in an all-stock deal was valued at $480m at the time of the announcement, but this also includes a 30% interest in the previously announced spin-off of I-80 Gold, which will hold Premier’s three assets in Nevada.

Equinox Gold announced the acquisition of Premier Gold for the best late-stage gold development project in Canada, a 50% interest in the construction ready Hardrock project. With construction expected to commence in the 2H 2021, the acquisition will add a smaller operating mine in Mexico with near-term expansion potential in Mercedes. Using a $1,800/oz. gold price deck and a 6.0% discount rate, the net asset value of these assets is approx. $1b. In other words, this creates significant value for Equinox, especially if gold prices rise. 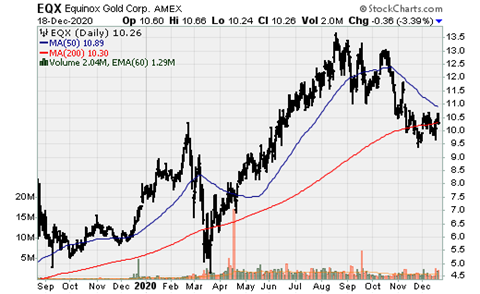 Gatos Silver: The company has been on a tear and rightly so given high-grade (300 g/t Ag + 8.50% Zn + Pb), low-cost Cerro Los Gatos mine as it went unnoticed by the market since its IPO. This week’s appreciation in the stock price was augmented by the inclusion into the GDXJ ETF and the Russell 2000 small-cap index. 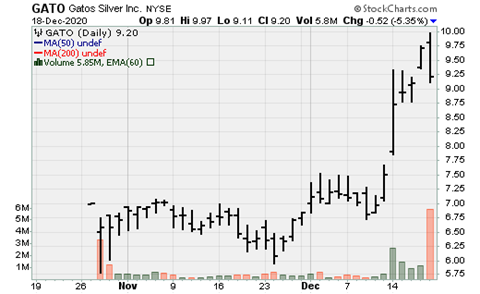 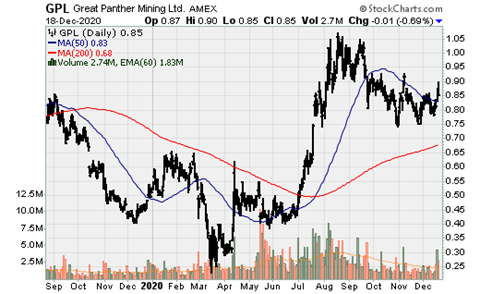 GR Silver: The company continued to report excellent drill results at its Plomosas Silver project in Sinaloa, Mexico. Highlights include: 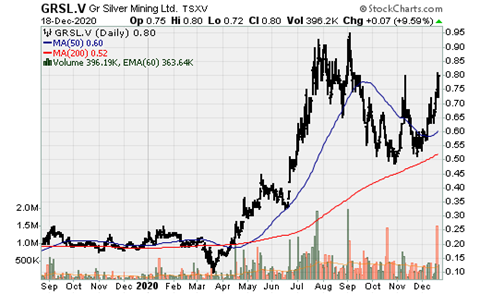 Mako Mining: Mako announced positive drill results from the Bayacun Zone within the Las Conchitas area of its San Albino-Murra property in Nueva Segovia, Nicaragua. It is located roughly 2.5 km south of the San Albino gold project, which is being developed and on track to reach production in the 1H 2021. The goal of the 2020 drill program at Las Conchitas is to focus on the most promising zones of near-surface, shallow dipping, high-grade gold mineralization to delineate a maiden resource estimate.  Since 2019, the Company has completed 125 shallow diamond drill holes totaling 10,484m within the Bayacun Zone, which is among the most promising zones within the Las Conchitas area.

A total of 21,065m within 258 holes have been drilled at Las Conchitas since the 2019-20 drilling campaign. This release includes 16 holes, designed to further test the strike and dip extension and improve the understanding of the structural controls at the Bayacun zone. Highlights include: 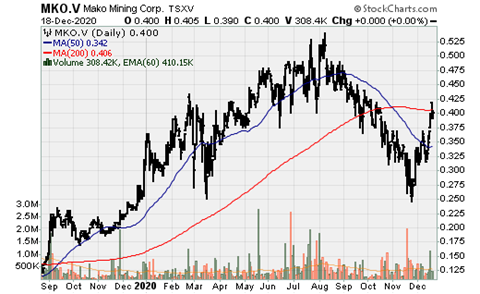 McEwen Mining: The company announced flow-through financing, which will serve to destroy more shareholder value. The stock reached a high of $4.70/share back in 2016, and through dilution, marginal assets, and its inability to control costs, the company is currently slightly above $1/share. But could this be a good investment? Low-quality companies tend to outperform in a bull market, so this could make for a nice trade. Its most valuable asset is its Los Azules project in Argentina, which is likely why the market cap is significantly higher than it should be based on the cash flow generation or lack thereof from its operating assets. 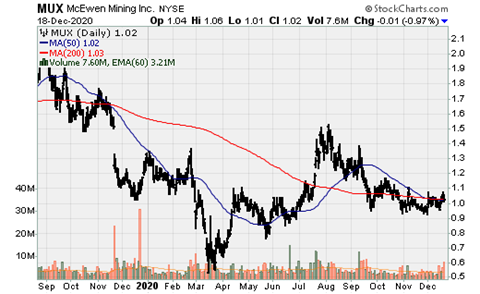 New Found Gold: Announced partial results from six additional holes drilled at the Keats Zone drilled as part of the Company’s ongoing 100,000m diamond drill program at its Queensway Project, 15 km west of Gander, Newfoundland. Highlights from this release include; 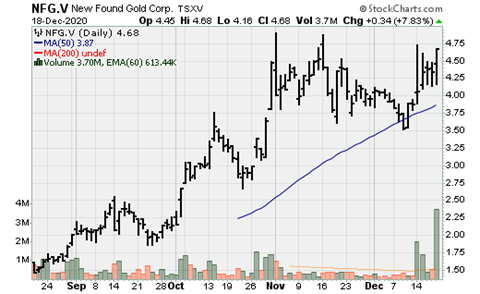 03 Mining: Reported a positive preliminary economic assessment (PEA) for its Garrison Project. Highlights of the PEA include: 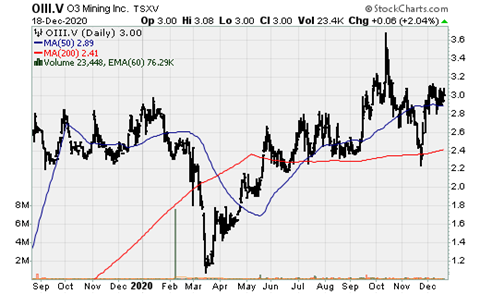 PureGold: The company achieved first production at the high-grade PureGold mine (Madsen) in Red Lake, Ontario. Mine and milling operations will ramp up over the coming quarter. The mine is scalable with material exploration upside on its property, with an open 7km gold system, open at depth. While the company is on the expensive side based on the current mine plan, it will inevitably grow both from a production and life of mine standpoint. In early 2019, Puregold published a PEA for its Fork, Russet, and Wedge deposits. The PEA outlined a mine life extension of 3.7 years with total production of 210k oz. Au. While small, the company has yet to engage in an aggressive drill program to significantly expand resources and production, focusing on Madsen’s mine build. 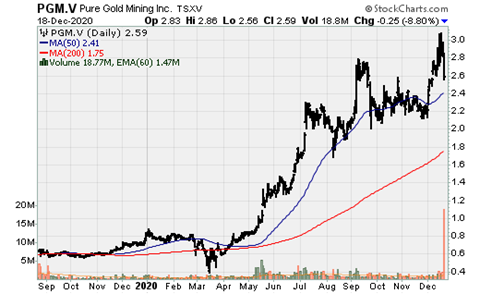 Roxgold: One of the more exciting West African junior gold producers received the mining permit and broke ground (early works) at its Seguela development project, with full construction ramping up next year with the first production projected in 2H 2022. This was announced following the release of an update MRE last week, with a 97% increase in Indicated resources to over 1m oz. Au and a maiden Inferred resource estimate at Koula of 281k oz. Au. Not only will Seguela serve as its primary growth driver, and Yaramoka, generate significant cash flow allowing the company to advance and develop its larger-scale Boussoura project down the road. 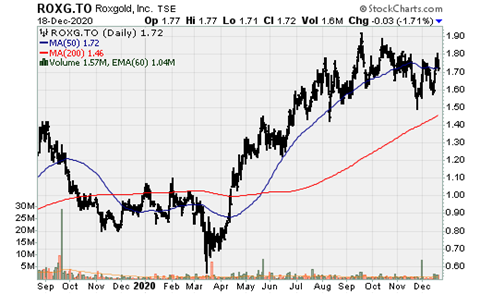 Santacruz Silver: Reached an agreement to extend the Zimpan mine lease and update the Zimapan mine’s status. The lease was extended from December 31st, 2020, to June 30th, 2021. The company is also at an advanced stage of negotiations regarding the Zimapan mine and related assets’ acquisition. While Santacruz silver is a lower quality silver or rather base metal produced with silver byproduct, completing this acquisition will greatly improve the ability to generate significantly higher cash flow. 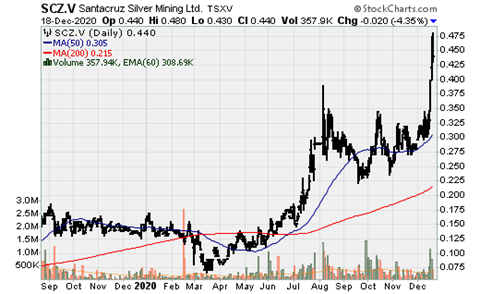 Wesdome: Announced an updates MRE at its Kiena Mine complex with a significant increase in the Indicated category in the A Zones. The updates MRE will form the basis to complete the pre-feasibility study in 1H 2021. Kiena Deep A zones Indicated Resources increased 77% to 717k oz. Au, with Inferred resource in the Kiena Deep A zone of 120k oz. Au. In aggregate, the Kiena Mine complex Indicated and Inferred resources stand at 796k oz. Au and 656k oz. Au. 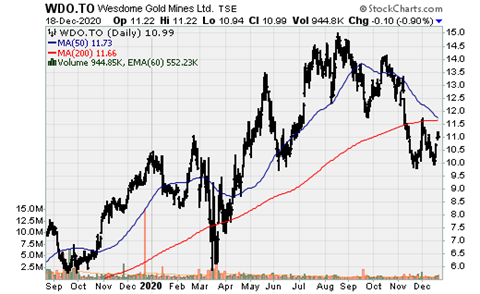 Waiting for the Glass Ceiling to Break