The two day rise in the gold price of more than US$50 fizzled out on Tuesday. The gold price is down about 7% (in US dollar terms) since its year-to-date high set on January 6. It is also down 13% from its all-time high set in August 2020.

The silver price, boosted by social media attention, did not set its year-to-date high until February 1. Since then the silver price has slid about 5% from that high.

Chairman Powell testified to Congress on Tuesday stating that the Fed plans to stay its course of keeping the Fed funds rate low. It is also continuing its asset purchase. This did little to inspire a further rise in the gold or silver price. But what about rising government bond yields?

The increase in inflation expectations, evidenced by the increase in longer dated US Treasury yields, caused scrutiny of Powell’s every word. Commentators searched for signs the Fed is changing its stance to one of tighter policy in order to ward off inflation taking hold. But Chair Powell stated in his prepared remarks that:

“The economy is a long way from our employment and inflation goals, and it is likely to take some time for substantial further progress to be achieved.”

We note one other passage in Chair Powell’s prepared remarks that is key to determining when the Fed might change its stance towards tighter policy:

“… Regarding our employment goal, we emphasize that maximum employment is a broad and inclusive goal. This change reflects our appreciation for the benefits of a strong labor market, particularly for low- and moderate-income communities. In addition, we state that our policy decisions will be informed by our “assessments of shortfalls of employment from its maximum level” rather than by “deviations from its maximum level.” This change means that we will not tighten monetary policy solely in response to a strong labor market. Regarding our price-stability goal, we state that we will seek to achieve inflation that averages 2 percent over time. This means that, following periods when inflation has been running below 2 percent, appropriate monetary policy will likely aim to achieve inflation moderately above 2 percent for some time …” (bolding added).

It’s Not About Inflation Anymore?

When Chair Powell’s testimony this week is combined with the minutes from the Fed’s January meeting (released last week), where ‘inflation’ was mentioned approximately 65 times but not in the context that inflation was worrisome or too high, the message we hear conveyed by the Fed is that it is not worried about inflation. In fact, the Fed wants higher inflation. The Fed’s ‘stable price’ mandate was put in place in 1977. However, the explicit 2% inflation target, as measured by the personal-consumption expenditures price index (an inflation gauge released by the US Commerce Department), has averaged only 1.3% since it was established in 2012.

The question that now arises: How high is too high for rising government bond yields?

This question is especially relevant given the fact that government debt is at or near record high levels. Also many governments, including the US, are working on even more spending packages. These packages will are to both support household income levels and large infrastructure upgrades. 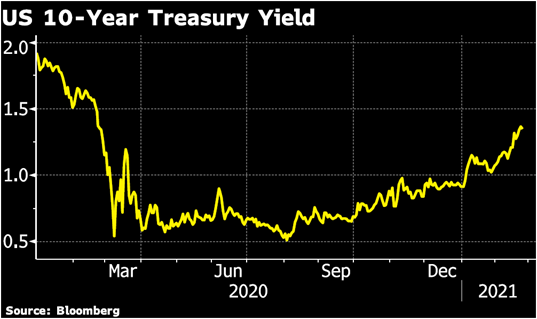 We believe the near-term higher inflation is likely to be ignored by central banks as ‘transitory’ or temporary as a result of the huge drop in 2020. If this ‘transitory’ inflation increases government bond yields beyond early 2020 levels then central banks are likely to implement some form of yield curve control to keep government borrowing costs low in a time of rising debt levels.

Three examples of yield curve control that were discussed at the Fed’s June 9-10, 2020 meeting are:

Yield curve control is different from the current quantitative easing program. Under quantitative easing the Fed announces a set amount of Treasury purchases over a specified time frame. The Fed’s current quantitative easing policy is to purchase at least US$80 billion in Treasury securities per month. It will also purchase at least US$40 billion in agency mortgage‑backed securities per month. Under the current plan interest rates may accordingly still rise in response to market forces. Under yield curve control interest rates will not rise beyond the cap set by the Fed. This would leave the amount of Treasury purchases for the Fed open-ended. The Brookings Institution explains that:

“under yield curve control (YCC), the Fed would target some longer-term rate and pledge to buy enough long-term bonds to keep the rate from rising above its target.”

The advantage of yield curve control for governments is that inflation will rise faster than government borrowing costs. This gives governments even more room to increase spending, without having to worry about how to finance the increased spending. This also puts a cap on many any other forms of debt that are tied to government bond yields.

The Institute of International Finance updated Global Debt Monitor was released last week. It showed that governments added $12 trillion in government debt in 2020. It also showed that they are expected to add another $10 trillion this year.

Bottom line is that the Fed and other central banks are commitment to very accommodative monetary policy. This and the growing debt levels are long-term bullish factors for gold and silver prices.

0
Someone Please Tell Powell, Yellen And Biden That We Are Going To Need A Lot…Calibre Exceeds High End of 2020 Production Guidance With 136,009 Ounces